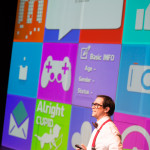 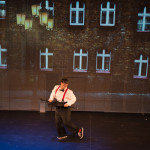 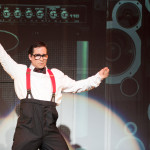 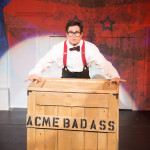 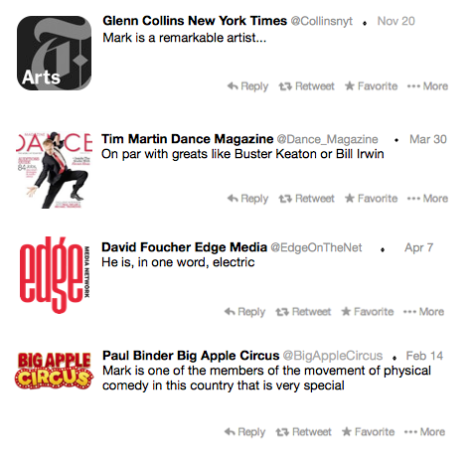 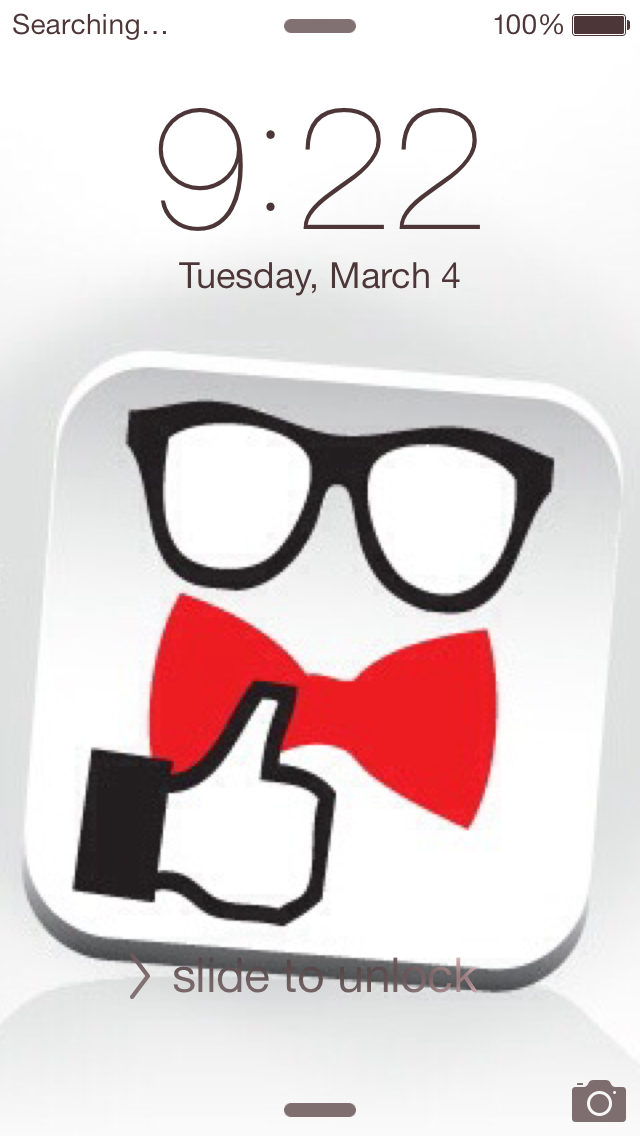 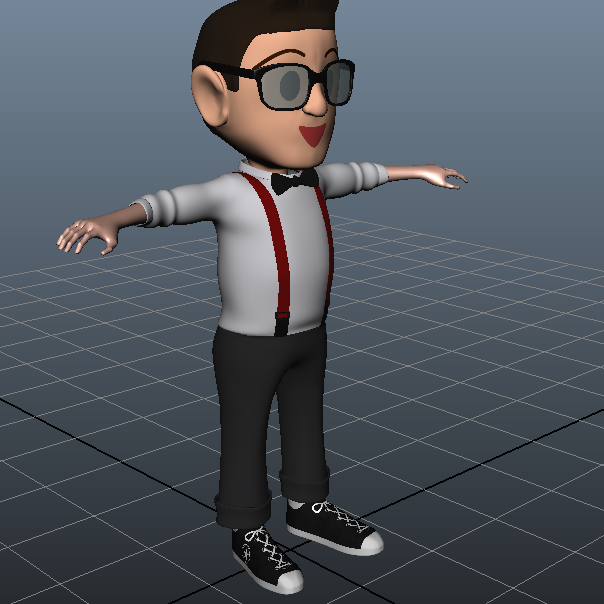 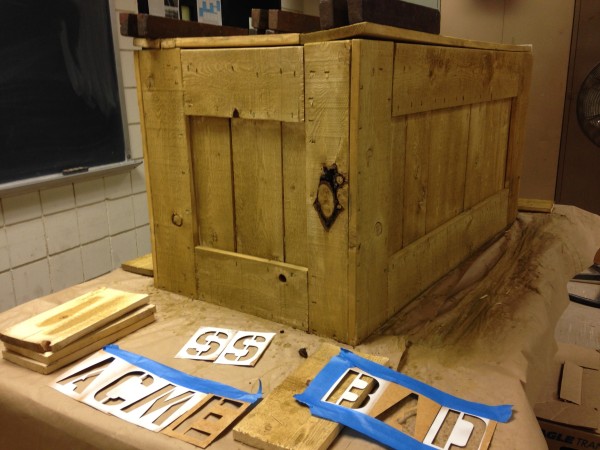 Media Advisory: One clown’s journey to find love and identity in the Social Media age

Mark Gindick knows a thing or two about physical comedy. Having been called “…the next level of clowning” by Spectacle Magazine and being described as “…on par with greats like Buster Keaton and Bill Irwin,” Gindick brings Wing-Man, his unique “one clown show” that he created, wrote and stars in, to the New York City College of Technology (“City Tech”) in Brooklyn for four performances from March 26 – 29. Produced by Michael and Tina Bongar of Clown Cloud Productions and directed by West Hyler (Jersey Boys, Big Apple Circus’ Legendarium), Wing-Man is a hilariously engaging and heartwarming tale of one man’s attempt to harness the power of social media to find love – or at least a meaningful date – in the 21st Century. Tickets are on sale starting March 1.

Audiences will know they are in for something very different before the show even begins when they are encouraged to keep their smart phones on for the beginning of the show. That’s because the stage is transformed into one large video screen that becomes part of the production itself and is interactive with both the performer and the audience. Not a word is spoken throughout the 90-minute theatrical comedy. Instead, it is Gindick’s considerable comedic talents and interplay with the audience and the unique technology that brings this romantic romp through the internet to life.

Wing-Man, which won BEST ONE-MAN SHOW at the United Solo Theatre Festival, is a live, interactive and modern take on Charlie Chaplin’s Modern Times. While Chaplin’s classic film dealt with the struggle to survive in the rapidly evolving industrialized world of the 1930s, Gindick’s Wing-Man character must navigate the social pitfalls of a fast-paced world where “Likes,” tweets and texts often substitute for real interpersonal communication. With a ton of laughs and a trace of melancholy, Wing-Man confronts the demands of modern digital technology on our lives.

Mark Gindick is a graduate of the world famous Ringling Bros.’ Clown College and went on to perform in Ringling Bros. and Barnum & Bailey before becoming a featured performer for several years with the Big Apple Circus. In addition to Chaplin, Gindick takes a page from the classic greats of physical comedy such as Harold Lloyd and the Marx Brothers, along with modern influences Bill Irwin, David Shiner and his own co-star in Big Apple Circus, Grandma the clown (Barry Lubin). Wing-Man is a uniquely modern production that adds its own lovable stamp on the genre of physical comedy.

ABOUT NEW YORK CITY COLLEGE OF TECHNOLOGY:
The New York City College of Technology (City Tech) residency program is a unique opportunity for professional artistic organizations to work with undergraduate Entertainment Technology students to realize production values and work with technology unavailable to these artists in most other venues. The Voorhees Theater will be an exciting new performance venue in Brooklyn for experimental collaboration between art and technology. Production support is provided by students and faculty of the College’s nationally unique Entertainment Technology Department. For information about studying Entertainment Technology at New York City College of Technology, contact Professor Susan Brandt, Production Manager, Theatreworks at 718-260-5595 or sbrandt@citytech.cuny.edu. You may also visit www.entertainmenttechnology.org

“The more things change, the more they stay the same.  Take ‘Wing Man’ at City Tech.  Yes, there’s a huge electronic screen onstage.  Yes, it boasts the latest in social networking’s bells and whistles.  But no, it’s just an old-fashioned story of a sad, lonely clown seeking happiness and love.  Mark Gindick’s solo performance is bright and clever.  He offers a charming glimpse into today’s limitless, yet somehow empty world of social media.  Without uttering a word, Gindick in his oversized glasses, tuxedo pants and red suspenders deadpans directly to the audience.”

Wing-man has just launched a new website that is simply amazing! Check out our reviews, media and don’t forget to get our swag from the shop or donate to Wing-Man! 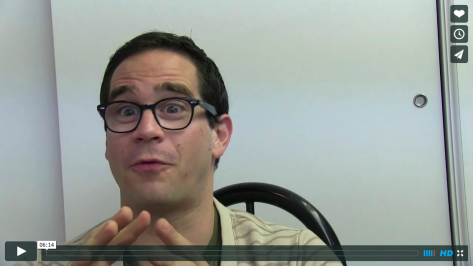 Wing-Man and The Next Little Big Thing Productions were chosen as a 2014 Resident Company of the New York City College of Technology, Entertainment Technology division.

We finished the first part of our front money fundraising campaign!

Read about our campaign or watch highlights and what the cast of Avenue Q says about Mark Gindick and Wing-Man. 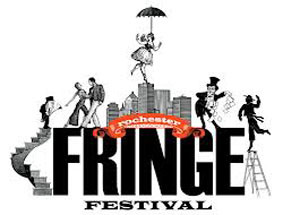 “…Gindick is a gifted physical comedian, clearly influenced by the likes of Charlie Chaplin and the Marx Brothers. Like Chaplin, he performs without uttering a single spoken word (until the very end of the show). Also like Chaplin, Gindick’s humor comes with a hint of melancholy. But for the most part, the laughs in “Wing-Man” come fast and furious.” – Read More

Mark Gindick flew to Warsaw, Poland to perform with the largest Solo Theater Festival in the world.

“…But Saturday was full of surprises. The first performance was March Gindicka, the famous American comedian, who won the hearts of the audience in Warsaw without saying a word. Multimedia and interactive performance of “Wing-Man” is the story of a man looking for love. Actor uses facebook to show how the modern world, people come into contact and what are the difficulties. He keeps pulling to the stage the audience to have played given to them by the roles: the girl on a date at an amusement park and a psychoanalyst. Gindick with charm and warmth builds a story about loneliness and tireless willingness of … ” – Read a review of his performance at the festival here. 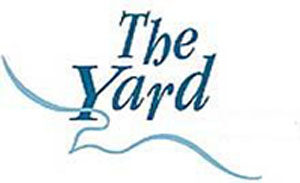 “Forget CABARET. From The Yard’s point of view, life is a vaudeville, good friend. And Mark Gindick proves the point in WING-MAN, a hilarious one-man show with not one live word spoken. It’s live but silent. It’s physical high comedy without the bad low jokes. On the face of it, Mark Gindick – physical comedian and 21st Century professional circus and stage clown – shows us his courageous quest for love and hot dates via the latest social media. In the artist’s words it’s simply a question Quixote could have posed to his own wing-man Sancho Panza, “How do I speak less and lust more?” – Read More at Dance Enthusiast Magazine.